As a physician, a patient comes to you presenting with bone pain, weight loss, nausea, and vomiting. Ordered tests come back abnormal: the complete blood count (CBC) shows low cell counts with abnormal cells, calcium, urea, and creatinine levels are elevated, and the X-ray demonstrates bone lesions. All these signs point towards multiple myeloma, a type of cancer in which plasma cells form multiple masses in the bone marrow. Therefore, a serum protein electrophoresis is ordered to confirm your suspicion.

Electrophoresis is a common laboratory technique utilized in research and diagnostic settings, however, how does electrophoresis detect and quantify proteins of interest? To begin with, electrophoresis is a method used to separate charged particles in a gel medium by their rates of migration using two opposing electrodes. Electrophoresis uses the electrochemical cell in which the cathode is the negative electrode where reduction occurs and cations (positive ions) migrate to. Consequently, the anode is the positive electrode where oxidation occurs and anions (negative ions) migrate to.

Proteins are ampholytes, meaning that they have a positive or negative charge based on their surrounding pH, which can be altered depending on the type of buffer used. The pH of the gel must be sufficiently away from the protein’s isoelectric point (pI), the point in which the protein has a net charge of zero. If a protein has no charge, it will precipitate out of solution and not migrate along the gel. Buffers are typically set to be higher than the pI of proteins, about 8.0-9.0, therefore the protein donates its protons to become negative and migrates to the anode. The buffer conducts the charge of the protein across the gel, and the current applied helps the proteins to move. 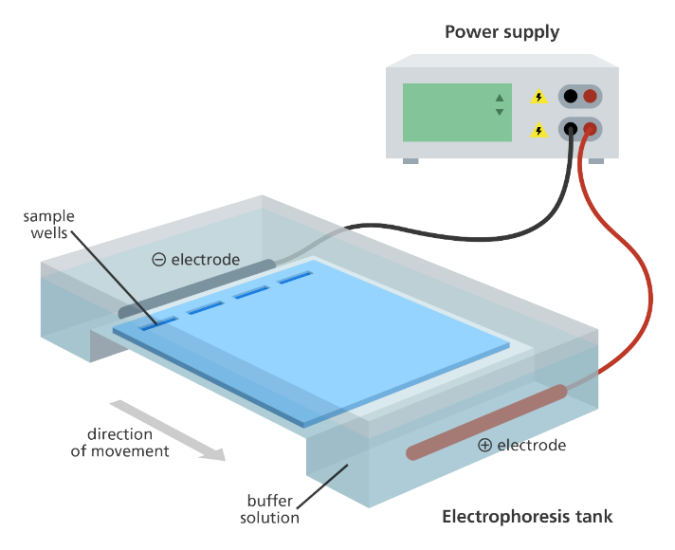 The mobility of proteins in electrophoresis is dependent on their charge and mass. As mentioned earlier, most buffers have a pH higher than a protein’s pI, therefore, the greater the protein’s negative charge, the faster it will migrate to the anode. The mass of the protein affects its mobility because larger proteins cannot move as quickly through the gel’s pores as smaller proteins. Some electrophoresis procedures are used to separate very small molecules such as sodium dodecyl sulfate polyacrylamide gel electrophoresis (SDS-PAGE), used in the separation of DNA fragments. However, other gels, such as agarose, are used for the separation of larger molecules, such as proteins.

The ionic strength of the buffer also affects protein mobility, because negative ions from the buffer can form an ion cloud that attracts other ions in the sample. An increased ionic strength would slow down migration due to the sample being attracted to the ion cloud as opposed to the anode. Due to this ionic strength of the buffer, another phenomenon, termed electroendosmosis, occurs.  Negative ion clouds also attract any positive ions that are present in the buffer, forming a positive ion cloud at the surface of the gel. Whenever a voltage is applied through the gel, this positive ion cloud not only pulls the positively charged proteins to the cathode, but it also pulls water which takes any uncharged or weakly charged proteins along with it. In serum protein electrophoresis, gamma globulins are uncharged will be pulled along with the water, appearing behind the sample application point on the gel.

After the sample is finished migrating, it is then quantified using densitometry. Densitometers use modified spectrophotometry to convert the separations into peaks of a graph in which the area under the graph can be quantified.

After the laboratory technologist has finished running the sample and quantifying the peaks, the patient’s gel (Figure 2) appears as B and densitometer reading as D with a distinct monoclonal band in the gamma-globulin portion of the gel. As reference, a normal gel electrophoresis and densitometry reading have been provided in A and C, respectively.

Due to this abnormal result, immunofixation electrophoresis is performed on the sample. This additional test determines which specific monoclonal protein is present by testing additional lanes with antisera (anti-IgG, -IgA, -IgM, -κ, and -λ) that will bind to their respective proteins (IgG, IgA, IgM, κ and λ) and precipitate in the gel. The abnormal plasma cells in multiple myeloma are responsible for producing these antibodies detected in immunofixation electrophoresis. The antibodies produced consist of two main parts: heavy and light chains (as shown in Figure 3). Heavy chains can either be IgG, IgA, or IgM, and light chains can either be κ or λ. The finished immunofixation electrophoresis can be seen in Figure 4, with the original serum protein electrophoresis on the far left. In the subsequent lanes, antisera was added and distinct bands are shown on the IgG and λ lanes, therefore, this patient has multiple myeloma and is producing IgG λ from their plasma cells. 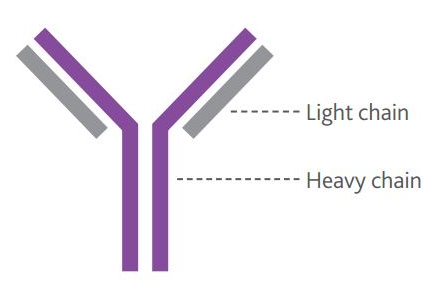 Figure 3: Structure of an antibody 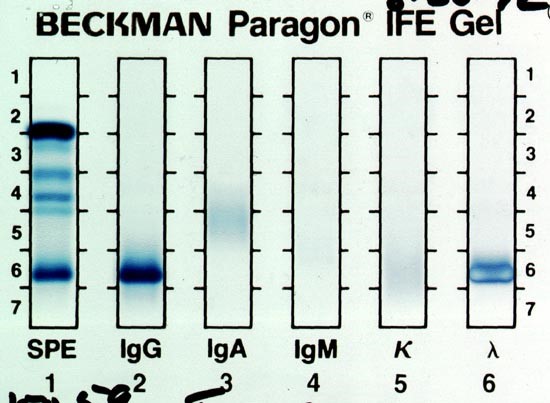 My Tweets
Join 29 other subscribers