**Brendon Bissonnette, a Biology and English post-secondary student with a love of cetaceans, will discuss his education and the animals he admires.**

Brendon Bissonnette, Biology and English student at the University of Ottawa

My name is Brendon Bissonnette, 22, and I’m currently enrolled at the University of Ottawa, completing a double major in Biology and English.

For as long as I can remember, I have been drawn to killer whales, known more commonly as “orcas,” a name derived from their scientific name Orcinus orca. Many people are familiar with the movie series, “Free Willy”, which played a significant role in fuelling my passion for Cetaceans from a very young age. Perhaps it is their sleek black-and-white coloration, their strong family bonds and the culture between matrilines and pods, or their unrivalled intelligence that has captivated me and inspired me to dedicate my life to the study of these sentient, marine mammals.

Orcas are Cetacea in the suborder Odontoceti (“toothed whales”) and are one of 35 species in the oceanic dolphin family, known as superfamily Delphinidae. Although orcas are also referred to as killer whales, they are in fact the largest member of the dolphin family, and not truly whales at all. Orcas can grow up to 32 feet and weigh up to 9 tons, and although tending to aggregate in cold water, they inhabit all oceans of the world. Male orcas have an average lifespan of 50-60 years, whereas females can live up to an average of 80 years. However, the oldest known orca on record is J2 “Granny” who is an estimated 105 years old. In captivity, on the other hand, most orcas do not live past their teens. There are many different ecotypes of orcas, primarily: Residents, Transients and Offshore orcas. Each ecotype favours different seasonal distributions and prey. Residents prefer to feed on fish, namely salmon. Transients prefer to feed on other marine mammals, including seals, porpoises and baleen whales. Offshore – the most elusive ecotype – spend most of their time offshore along the continental shelf, as their name suggests, and prefer to prey upon sharks and other large fish. Residents and Offshore orcas travel in large matrilineal pods (~10-100), whereas transient orcas prefer to travel in small groups (~1-5). I hope to dedicate my life to the study of transient killer whales, their social structures, behaviour and methods of predation.

In the hopes of studying these intelligent marine mammals, I enrolled at the University of Ottawa back in 2012. I have specialized in animal physiology and conservation ecology. Courses such as “Animal Form and Function,” “Animal Physiology (I & II),” “Ecology,” “Genetics,” and “Vertebrate Zoology, “ have introduced me to laboratory work and several dissections, which will benefit me for future necropsy examinations. I was fortunate enough to participate in a study with Environment Canada as credit for a Conservation Biology course. The study consisted of  “Habitat Associations and Multi-Species Recovery Plans Under Canada’s Species At-Risk Act.”

A large part of orca research involves public outreach and educating individuals on the plight of endangered populations. For the past year, I have adopted Southern Resident orca members J28 “Polaris” and K21 “Cappuccino” through the Whale Museum, which supports ongoing education, research and public outreach on their behalf. The main threats to orcas are: prey depletion, pollution, boat collisions, military sonar and excessive noise, commercial hunting, capture for entertainment, and contamination by human activity. In fact, “recent studies have found that orcas are amongst the most contaminated marine mammals in the world. Pollution and chemical contamination make orcas more susceptible to disease and likely cause reproductive difficulties” (Defenders of Wildlife, 2016). This is seen no more frequently than it is in the Southern Resident population, whose calf mortality rate is roughly 50%.

This summer I will be traveling to the Pacific Northwest in the hopes of seeing resident and transient orcas, to further my passion and drive to complete my final year and begin a profession as an orca biologist. I will couple the intellectual precision of a scientist with the heart of a writer, to vividly depict these fascinating creatures.

Eva Saulitis once said, “a question we all eventually face is whether we have the courage to love someone or something when we know we are going to lose them… we must bring ourselves to speak on behalf of all vanishing species in an increasingly vulnerable natural world.”

I must say, I could not agree more. 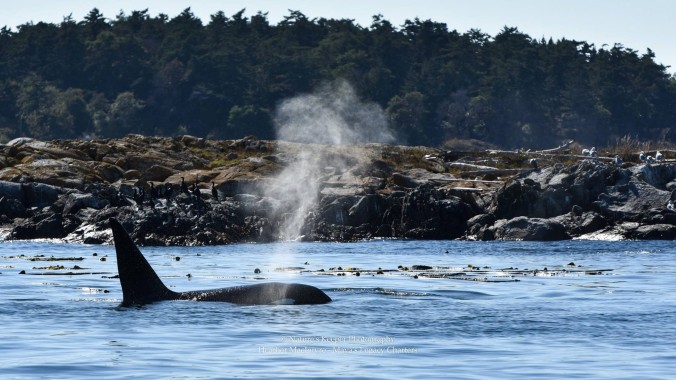