For my final rotation in the clinical laboratory, I was placed in the chemistry lab. This branch of the lab deals with a large majority of the tests routinely ordered in a hospital, such as glucose, electrolytes, etc. Within the chemistry laboratory, there is the receiving bench, in which a medical laboratory assistant (MLA) receives samples that have been dropped off by healthcare personnel or the hospital’s pneumatic tube system. A pneumatic tube system sends carriers containing samples through a tube system with the help of a vacuum. When these samples come into the lab, the MLA has to scan the sample’s bar code into the Laboratory Information System (LIS), and input the information written on the tube, such as time and date of collection, collector information, and any other pertinent patient information. I had the chance to work on the receiving bench with the MLA, and this experience, along with phlebotomy was great in understanding the full process and transit of samples to the laboratory. It is important for a technologist to understand these processes in order to be able to trouble-shoot issues that can occur before the analysis of a sample. 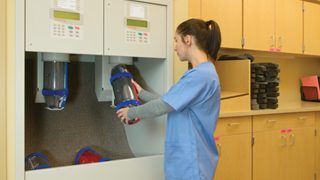 After a sample is received into the lab, it is then put onto the automated track system, which transports the samples to the machines that will perform the analysis. Due to the high volume of samples in the laboratory, one technologist is responsible for reviewing all results that come out of the main chemistry analyzer. Since chemistry results are automatically released to the patient floor if they fall within normal parameters, only abnormal results are reviewed by the technologist. The technologist reviews these abnormal results along with the patient’s previous results and clinical condition. The technologist uses independent judgement to determine whether these results represent the patient’s condition, or are due to an error.  For patients that have new severely abnormal results that are in need of intervention, results will be immediately phoned to the appropriate patient care area. However, there are some times in which abnormal results are not phoned. This occurs with patients whose results are expected due to a chronic condition, such as with kidney disease. Urea is a product of protein metabolism and creatinine a product of creatine metabolism. These are both waste products that are normally filtered out into the urine, however, in patients with kidney disease, they are not properly filtered out of the blood and are increased above normal levels. 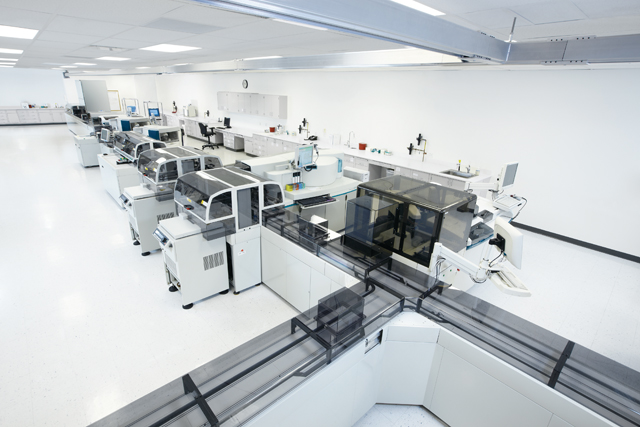 With the daily operation of instrumentation in the chemistry lab also comes the performance of quality control (QC). QC is defined as the processes performed that detect, decrease, and correct errors in the analysis of laboratory tests, and is performed by testing QC materials. For automated equipment, there is a daily schedule in which QC is performed for certain tests. QC results are then plotted onto Levey-Jennings charts, which show the distribution of data from the mean and standard deviations. Certain guidelines are used to accept or reject a run of quality control, known as Westgard rules. Based on the pattern of plotted data and the Westgard rule that is broken, random or systematic errors can be detected. Whenever random error occurs, an issue with precision in a test is present, such as the handling of reagents, or probe malfunctions. Whenever systematic error occurs, an issue with accuracy in a test is present, such as incubation temperature. Whenever a run of QC is rejected, it means that an error is present in the testing method, and that samples may have been reported falsely. Therefore, the cause of the QC malfunction has to be detected and corrected, and after that, all samples within that time period have to be retested to determine if there is a change in results.

Blood gas analysis is also performed in the chemistry lab, in which samples are tested in order to monitor a patient’s oxygen, carbon dioxide, pH levels, etc. The main uses of these tests are to determine a patient’s acid-base status, oxygenation status, or the presence of abnormal hemoglobins. Samples for these tests can either be collected from arterial, venous, or capillary blood. Arterial blood is the specimen of choice for these tests as it accurately measures the oxygen status of the blood. For babies who do not have adequate arteries to sample, capillary blood is taken, since it is very close to the makeup of arterial blood. All samples are put onto ice to halt the metabolism of cells within the sample. If the cells went through the processes of metabolism, the results tested would change significantly and would not represent the true physiological state of the patient.

One of the most common group of tests performed in the chemistry lab is urinalysis, and is commonly ordered by doctors when patients come in with vague symptoms that point towards urinary tract disorders, kidney disease, or diabetes. When urine samples are received in the lab, they are screened by testing pathological components in urine (such as protein, glucose, etc) semi-quantitatively using a dipstick method. Once the samples are screened and abnormal constituents are detected, the sample is reviewed microscopically for substances such as bacteria, yeast, casts, or crystals that may be giving the abnormal results.

Along with urinalysis, urine samples can be tested for a variety of chemical tests, such as calcium, phosphorus, etc. One common test performed from a 24-hour collection is the creatinine clearance, a test used to determine the filtration rate of kidneys. Since creatinine is a component of creatine metabolism that is steadily excreted in the urine, a decreased result would indicate that the waste product is not being excreted, and that there is a problem with the kidneys. Urine samples are also used for pregnancy testing, using the hormone β-human chorionic gonadotropin (βHCG), which is increased in pregnant women. The manual pregnancy test uses antibodies that bind to βHCG found in the urine. These antibodies contain a colored conjugate, and whenever a woman is pregnant, a line is shown across the test. Urine samples can also be tested for drugs of abuse, such as cocaine, opium, etc. Unlike the pregnancy test, a lack of a line indicates the presence of a drug. This testing device works by a different mechanism, in which a competitor drug is present in the test strip along with the antibodies. This competitor drug has a colored conjugate present. Therefore, whenever a drug is present is a patient’s urine, it binds to the antibodies, inhibiting the colored competitor drug to bind, causing no line to be seen in the test.

Drug toxicology screen for drugs of abuse. None of the tested drugs were detected in this patient’s urine.

In addition to blood and urine samples, other body fluids are processed within the chemistry lab. Cerebrospinal fluid (CSF) is collected and tested whenever a patient is suspected of having meningitis. Protein and glucose levels are tested, which differentiate whether the source of the meningitis is bacterial or viral. If the protein result is higher than normal and the glucose lower than normal, the patient has bacterial meningitis. Bacteria will ingest the glucose present in the CSF, and are a source of protein thus increasing the protein result. If the protein levels are higher than normal, but the glucose is still normal, the patient has viral meningitis. Viruses do not ingest glucose, but still contain protein increasing the result.

There are many other kinds of tests that can be performed in the chemistry lab, and are based on the patient population and size of the hospital. One chemistry lab may be completely different to another, however the quality and accuracy in the results released remains the same.