In this week’s blog, I will cover a basic concept in Microbiology, in particular colonial morphology. Colonial morphology in microbiology is simply noting the unique characteristics of microorganisms. In many cases, these unique visual characteristics can help technologists in the identification of the microorganism. Several different traits of bacteria can be seen best on blood agar. When first describing bacteria, size is mentioned. Bacteria can either be tiny, small, medium or large. Colonies referred to as tiny are also known as pinpoint and are barely visible on the media. With these kinds of bacteria, other characteristics of the bacteria are hard to note. Small colonies are generally less than 1 mm in size, medium colonies are 1 to 2 mm and large colonies are greater than 2 mm.

Additionally, color is an important trait. Some bacteria are white in color, which are typically Gram positive cocci in the Staphylococcus genus. The white color can help differentiate these bacteria from the grey colonies of Gram positive cocci in the Streptococcus genus. Some more notable colors are seen in Staphylococcus aureus, which can appear more golden in color, as aureus in Latin means gold. As well, another bacteria named Serratia marcescens is brick red in color, making it very distinguishable from many other types of bacteria. 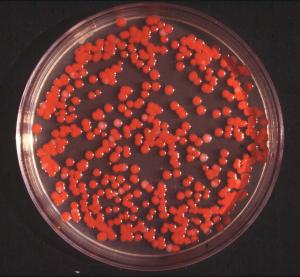 Texture is also noted. While most bacteria are creamy in texture, some can be dry, and others, such as Klebsiella pneumoniae can be mucoid. When touched with an inoculating loop, mucoid colonies will string out.

Density is another characteristic mentioned, and can be described as either transparent, translucent, or opaque. The shape of the colony can also give important information. Most bacteria have smooth edges, however, with fungi, the edges of colonies will be filamentous. Some bacteria can have rougher edges and some yeast, such as Candida albicans, can have footed edges.

Colonies can also be flat, round, or convex in shape. Other bacteria like Streptococcus pneumoniae are umbilicate and indent in the centre to give a ‘checker piece’ shape. Other bacteria are umbonate to give a ‘fried egg’ appearance. Another intriguing characteristic of bacteria is their smell, and sometimes technologists use this trait in helping to identify certain microorganisms. For example, two bacteria, named Pseudomonas aeruginosa and Eikenella corrodens smell like grapes and bleach, respectively.

Streptococcus pneumoniae. Note how the inside of the colonies indent inwards, making a ‘checker piece’ shape. 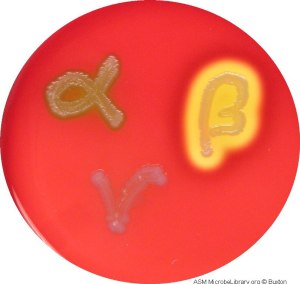 After explaining for traditional methods of identifying bacteria, I also wanted to explain a relatively new method used in the Clinical Microbiology laboratory in identifying microorganisms, called the Vitek Mass Spectrometer (MS). The Vitek MS is a revolutionary piece of equipment that is able to identify organisms in almost no time at all. This instrument uses the Matrix Assisted Laser Desorption Ionization – Time of Flight (MALDI-ToF) principle. To use the instrument, an inoculum of pure bacterial growth is put onto a small circle on a special Vitek MS slide. This inoculum is then layered with matrix, which co-crystallizes the sample and donates protons. However, if the microorganism is a yeast or looks mucoid on blood agar, formic acid must be placed before adding the matrix solution. After the formic acid and matrix are dry, the slide can be put into the instrument and enters a high pressure vacuum environment. Once it enters the instrument, a laser is emitted at the circle containing the sample, which ionizes the sample. These ions are carried within a flight tube and are separated between charge and mass. Once the ions reach the end of the flight tube, their flight pattern is recorded with the use of an algorithm. This algorithm is translated into a spectrum. The spectrum is analyzed by a database for a match in the computerized reference library, linking it to a unique identification of a microorganism. To get a more visual understanding of the mechanism, here is an awesome video to watch about the Vitek MS: