During my second week at the hospital, I was put on the Day 2 and 3 benches, alternating each day so that I could follow the specimens that I worked on the previous day. The Day 2 and 3 benches are also referred to as the primary and secondary benches (respectively). I will use both terms interchangeably throughout my blogs.

When entering the lab on my first day on the primary bench, the first test performed was the Clostridium difficile testing. C. difficile is a Gram positive bacilli that causes diarrhea in patients that have been on high doses of antibiotics for a long time. The antibiotics get rid of the patient’s intestinal normal flora. The C. difficile overgrows and produces toxins that damage the gastrointestinal tract, causing severe diarrhea. These types of infections are common in hospitals, and pose a serious infection control risk as the bacteria produces spores that can travel and infect other patients. Therefore, it is very important that we handle specimens being tested for C. difficile very carefully. The testing involved for C. difficile uses the Loop-Mediated Isothermal Amplification (LAMP) technique. This assay is different from the traditional Polymerase Chain Reaction (PCR) test, as the amplification of the DNA is not accomplished thermally, but by chemical reactions. Additionally, LAMP is cost-effective, quicker, and easier to run than traditional PCR. Any positive C. difficile results were immediately brought to the nurse’s attention via phone call so they could implement proper infection control protocols.

On the Primary Bench, one of the first group of samples examined are urines. While urines are a high volume specimen in the Microbiology lab, many urines either have no bacterial growth or insignificant growth. As well, these specimens have a tendency to be overly contaminated with normal flora. However, specimens that have a predominant growth of an organism are worked up using specific tests to identify the organism. Several spot tests were performed, such as oxidase, indole and PYR, which help us identify if it is a Gram negative bacteria belonging in the Enterobacteriacea family. As well, if it resembled a Gram positive cocci, I performed a quick catalase test to see whether it was Staphylococcus species or Streptococcus species. Staphylococcus bacteria are catalase positive, whereas Streptococcus bacteria are negative. Several other quick tests, such as Latex Agglutination for Staphylococcus aureus or Lancefield grouping for beta-hemolytic Streptococci, were performed.

There was a particular urine specimen on the primary bench that was interesting to me. This specimen grew as small white colonies on the Blood agar plate. When performing additional tests, it was shown to be catalase positive and latex agglutination negative. I had worked up the organism to identify it as a Coagulase Negative Staphylococci. However, I had remembered one of my simulated urine labs at school which had a similar looking organism and it had turned out to be a yeast instead. In remembering this, I went back and did a quick wet prep to see whether it resembled yeast. Lo and behold, it did! By knowing it was a yeast, we then performed a germ tube test to determine whether it was Candida albicans. The C. albicans grew a germ tube after incubation in horse serum. 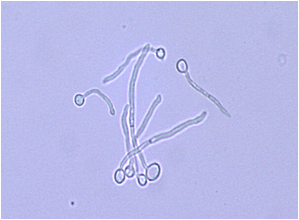 Germ tube as seen under x40 indicative of the yeast C. albicans

After the urines were processed, the routine specimens were analyzed. These include the body fluids, wounds, tissue, vaginal swabs, throat swabs, stools, you name it. Many of these plates are read for two days. Quantitation of growth is also recorded, as well as distinguishing features. For the body fluid specimens, any growth is considered significant as these fluids are from normally sterile sites. However, other specimens such as wounds or stools have a variety of normal flora present and need the help of several selective plates to isolate the potential pathogen. Anaerobic plates on these organisms have also been set up with many of these specimens to detect organisms that grow in the absence of oxygen.

On alternating days in the week, I was on the secondary bench. At the start of this bench, any positive blood cultures are removed from the BACTEC Blood Culture System, which is a machine that incubates blood culture bottles at the regular body temperature of 37°C. This machine recognizes when bacteria have grown in the blood, because the bacteria produce carbon dioxide that is detected by the machine. Any positive blood cultures must be called immediately with the gram stain result so that the doctor can start the appropriate treatment. 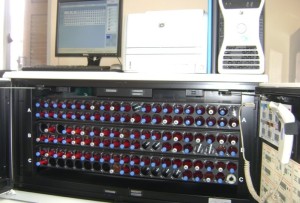 After the positive blood culture has been called and incubated, other duties of the bench are performed. The main duties of the secondary bench are to read plates that were reincubated from the previous day, perform additional testing and finalize reports to the doctor. Anaerobic plates are also taken out on this day to determine whether any anaerobic bacteria grew in the specimens. Susceptibility results are also reviewed before being sent out to the doctor. These results are read alongside any additional susceptibility testing to test for resistant organisms. As well, if a susceptibility report demonstrates certain resistant organisms, further tests need to be set up. An example of an additional test is an Extended Spectrum Beta-Lactamase (ESBL) plate for E. coli, Proteus or Klebsiella that demonstrate resistance to penicillins, cephalosporins and aztreonam. The lab also reports any antibiotics that are susceptible to the identified organism that the patient is already taking to decrease any unnecessary antibiotic usage.

During the middle of the week, there was an interesting display done by the company Leica. They had come to the hospital with a mobile laboratory that was within a transport truck. Since Leica is one of the main suppliers of Histotechnology equipment, this was a mobile Histology lab, displaying what they called “Tomorrow’s Lab”. During my lunch break, I had the opportunity to check it out. A Leica representative explained the setup of the lab, explaining how it demonstrated each step of the Histology lab. Many processes that used to be performed manually, such as coverslipping, are now able to be performed using machines. The lab also had microscopes that were connected to televisions so that more detailed readings could be made. Additionally, there were machines in the mobile lab used for specialized staining, such as Fluorescent In Situ Hybridization (FISH) and Immunohistochemistry (IHC) testing.

This week was definitely a learning experience in getting used to the main benches in the Clinical Microbiology laboratory! I definitely valued every single learning opportunity that I received. Every day I am amazed how I am able to apply in real life the concepts that were taught to me in school.