In the Mediterranean Sea, there is a wide variety of marine wildlife. However, one does not require to go deep within the depths of the sea to witness a stunning ecosystem. Some of it can be seen on Greece’s beaches. While swimming at the one of the many beaches in Afiartis, Karpathos, I came across one example of a beautifully unique marine creature, the sea urchin. 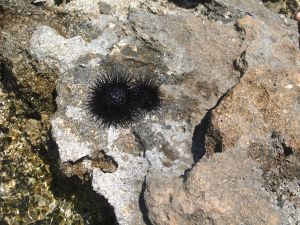 Taxonomically, sea urchins belong to the phylum Echinodermata and the class Echinoidea. There are more than 700 different species of sea urchins found all over the world. Some sea urchins belong to the family Diadematoida, and the genus Diadema. Sea urchins of this genera are found in tropic areas, mainly in shallow reefs on sand, stones or coral. As well, other sea urchins are from the genus Centrostephanus and are found in temperate and subtropical areas of the world. One specific sea urchin from this genus, C. longispinus, is found in European Mediterranean. They are typically found in rocky areas, which is where I had found the sea urchins in Afiartis. Another sea urchin that can be found in the Mediterranean are Paracentrotus lividus, also known as the “purple sea urchin”. They are also found in the Northeastern Atlantic area.

Sea urchins come in many colors (such as black, red, brown, purple and pink) and a variety of sizes. They are small and spherical in shape, with a diameter of between 3-10 cm. For a small animal, their bodies are complex. They are covered by a spiny shell referred to as a “test”. The shells inside the test are made of plates that are fitted close together and are used for protection against injuries. The spines on the outside of the shell are responsible for camouflaging or protecting the sea urchin from predators. Additionally, present at the bottom of their bodies are five teeth that help them consume algae and other nutrients. Another interesting characteristic of the sea urchins’ body is their “tube feet”. These are found on the outside of the sea urchin’s body, and are longer than their spines. These allow sea urchins to breathe, move around, attach to the ocean’s floor, and receive food.

Mouth of a sea urchin

Sea urchins are found in salt water all over the world, with some environments mentioned above. In addition to these environments, they can also live in kelp forests, sea grass beds, and the bottom of the sea. Their diet is slightly different with each environment they live in. For instance, sea urchins that live in rocky areas typically eat algae, sea grass, and marine invertebrates. In coral reefs, they feed on algae and small shellfish that can be found within the corals. On the bottom of the ocean, they consume algae, plants and dead fish. As well as preying on certain animals, some sea urchins have predators, such as otters or seagulls. The sea urchins mainly targeted by predators are those above the surface on rocky crevices. Conversely, those found on the bottom of the ocean have less predators. Due to this, they live significantly longer than others, with some having been thought to live for up to 200 years.

Sea urchins are sexual creatures, and begin reproducing around the ages of two to five years old. During fertilization, the female releases an egg into the water, and is joined by a sperm released by the male, producing a larva, also known as a pluteus. This fertilization process is fickle, and relies a lot on chance. For a successful fertilization, one of the most important factors involved is a pH gradient in the sperm’s mitochondria. Once the sperm are in the water, this electrolyte balance is based on sodium ions moving in and hydrogen ions moving out, which results in an increase of the sperm’s pH. Whenever the inside of the sperm has a lower, more acidic, pH than the seawater surrounding it, the sperm’s mitochondria is activated. Sperm need their mitochondria to be working at their full potential, otherwise they will not have enough energy to find an egg to fertilize. Due to global warming, the oceans are slowly becoming more acidic. The implications of this temperature increase were examined in an Australian study, where the motility of sea urchin sperm was tested over a variety of ocean pH environments. First, sea urchins were collected and injected with potassium chloride to stimulate release of sperm. Fluorescent dyes were used that glowed green whenever the mitochondrial membrane potential was low, and orange whenever it was high. Then, the sperm were placed into three modified pH states. One pool was held at the present pH conditions of oceans. A second was held at an approximation of the oceans’ pH levels by the year 2100, which had a pH level 0.3 units below that of today. The third pool was held at a pH level of 0.5 units below today’s oceans, which is an estimate of the pH levels by the year 2300. As the water in the pools became more acidic, the fluorescent dye within the sperm has changed from orange to green. For the waters mimicking the year 2300, the membrane potential decreased by more than 50% than that seen in present pH conditions. Interestingly enough, the sperm were not as affected by the water conditions of the year 2100. Therefore, sperm might not be as motile in future acidic oceans. However, researchers from this study stated that sea urchin sperm may be able to survive longer in the ocean due to this decreased mitochondrial membrane potential over time.

After sea urchins are born, they have several adaptations towards their environment, primarily for protection. One of these adaptations is a reflex against any sharp object or organism that comes their way. This reflex involves pointing all of their spines towards the affected area. A further adaptation of theirs is regeneration of the spine after damage. However, this regeneration process only happens with minor damage. Finally, sea urchins possess ‘light sensitivity’. This light sensitivity is viewed by the change in their colors during different times of day. During the daytime, sea urchins are darker in color than at night. This change of color is a result of skin pigment cells, named chromatophores, contracting at sunset, and extending at dawn. Whenever they contract, they expose sensory cells that are sensitive to light, causing the sea urchin to be darker in color.

As with any ecosystem, whenever the numbers of an animal start to significantly rise or fall, other populations surrounding them are affected as well. Over the past century, sea urchin populations and their patterns have been examined. Whenever the number sea urchins decreased in an area, it negatively affected the predators that fed on them, by decreasing their numbers as well. Conversely, severe increases of sea urchins have also been viewed. An example of this occurred in the 1980’s whenever the sea urchin population in the Caribbean increased quickly, with a maximum of eighty sea urchins per square meter. With this abundance of sea urchins, the seaweed in the area began to disappear and the coral reef began to erode. This destruction only ended after the sea urchins died from a water-borne disease.

After describing the abundance of sea urchins around the world, one may think that there is not much to worry about in terms of their conservation. However, there are several factors that cause significant decreases in these animals. Some of these are environmental factors, such as hurricanes and temperature increases. As well, other factors are man-made and consist of pollution and fishing. It is predicted that with the increase of sea urchin harvesting and ocean pollution, that the status of sea urchins could change to “endangered”. With a new mass extinction coming our way, we are called to act in environmental initiatives that preserve our oceans and commit to environmental stewardship. Additionally, legislation needs to be implemented in fishing, before these animals that were once so abundant become extinct.