For the past couple of weeks, I have been on the island of Karpathos, Greece, visiting family. In the cool mornings on the countryside of Afiartis, I like to go jogging. While I jog, I see bushes of purple plants lining the dirt roads and far up on the hills. These bushes contain the thyme herb that grows commonly in Greece, as well as in the rest of the Mediterranean. While bending down to pick up a couple of its flowers, I can smell its strong aromatic fragrance. This is a result of the many glandular hairs found throughout the plant. Whenever these hairs are broken, the aromatic smell is released. The thyme plant also produces essential oils, which are advantageous as the plant can lack water in its dry environment. When these essential oils evaporate, they surround the plant and create a saturated environment, which decreases water loss.

Origin of the Word

From ‘My Big Fat Greek Wedding’ it has been said that the root of every word is Greek. As this might not hold true for everything, it certainly does for the word ‘thyme’. However, the exact origin of the word is not exactly known, with conflicting sources that describe the origin of the word. Some say that it originates from the Greek word, thymos, which means courage, since thyme used to be used as a symbol of bravery. However, this word has a second meaning. It originally referred to smoke, as thyme used to be burnt in temples. Furthermore, another source claims that the origin of the word could be from the Greek word thyo, which means sacrifice, since it was used historically in temples for sacrifices.

There are many species of thyme that exist throughout the world. Taxonomically, the thyme herb belongs to the family Lamiaceae, similar to oregano. Common thyme is referred to as Thymus vulgaris. Another species of thyme commonly found in Greece is wild thyme or T. serpyllum, which is the thyme pollinated by bees for honey. Other species of thyme are T. citriodorus, T. herba-barona, T. praecox, and T. pseudolanuginosus.

Bushes of thyme on my morning jog. Afiartis, Karpathos, Greece.

Thyme has many known culinary and aromatherapy uses. However, throughout history, it has also demonstrated remarkable medicinal properties. With current research, these old properties are being revisited for their potential use in medicine today. In medical practice, the essential oil is used, not the dried herb. Every thyme essential oil has different chemical compounds, named phenols, that are present at different concentrations. The two principal phenols are thymol and carvacrol. Below I will describe the medicinal uses that this essential oil exhibits.

While most people have heard of the antiseptic mouthwash, Listerine, many may not know that one of its main components is thymol. In 1879, it was created by Dr. Joseph Lawrence and pharmacist Jordan Wheat Lambert. Their invention was inspired by Joseph Lister, who was a pioneer of antiseptic techniques in medicine with the recommendation of hand-washing procedures before and after surgery. There have been several other uses for Listerine. Throughout the 1920s, it was used to freshen breath, cure halitosis, clean floors, and reduce dandruff. From the 1970s to the 1980s, it finally started being used for oral hygiene to prevent plaque and gingivitis.

Throughout time, thyme essential oil has been observed for having antifungal and antibacterial properties, even though the mechanism behind it was not fully understood. Today it is known that these properties are due to the thymol and carvacrol present in the essential oil. The antifungal properties of thyme have been studied in Pakistan and it was shown that T. serpyllum had a moderate fungicidal effect on the fungi Fusarium monoliforme, Alternaria species, Candida albicans, Candida glabarata and Fusarium solani. Many studies have also pointed to its antibacterial use in common bacteria. While showing susceptibility to fungi, and easily treatable bacteria, it has also been proven to be effective against multiple drug resistant bacteria. In a Polish study, the activity of thyme oil was tested against multiple drug resistant Staphylococcus aureus, Enterococcus faecalis, Enterococcus faecium, Enterococcus durans, Escherichia coli and Pseudomonas aeruginosa. When the susceptibility to thyme oil was measured against all of these bacteria, it was shown that almost all strains were sensitive to thyme oil in low concentrations. With the progressive increase of antibiotic resistance today, this finding may have significant implications. Perhaps we will need to go back to more natural methods of eliminating these antibiotic resistant bacteria.

Because of its antibacterial effects, recent studies have demonstrated that thyme essential oil displayed antibacterial properties against the foodborne pathogens Shigella sonnei and Shigella flexneri. The essential oil has also been shown to prevent food from spoiling due to other foodborne bacteria such as Salmonella, Enterococcus, Escherichia, and Pseudomonas species. In one study performed in Brazil, Listeria monocytogenes growth in beef was decreased with the use of thyme essential oil using vapor activity or an edible gelatin coating on the beef.

In past studies, it was demonstrated that thyme essential oil possessed anti-inflammatory properties by inhibiting cyclooxygenase-2 (COX-2), which is responsible for stimulating the production of prostanoids (which include prostaglandins, prostacyclins, and thromboxanes), and cytokines. These are proteins involved in the inflammatory process. In another study conducted in Brazil, it was also noted that thyme essential oil displayed effects towards the movement of white blood cells to the injury site, by inhibiting chemotaxis, which is the movement of white blood cells in response to chemicals. This further contributes to thyme oil’s anti-inflammatory properties.

When oxygen is metabolized in the body, there are “free radicals” that can be produced, such as hydroxyl, superoxide radicals or hydrogen peroxide, which result in oxidative damage to DNA. In past experiments, thyme oil and its phenol have been evaluated for their antioxidant effects. It was shown that the oil had potential of scavenging nitric oxide and free radicals, as well as donating hydrogen ions. In another study performed in Moscow, Russia, thyme essential oil significantly decreased lipid peroxidation products in the blood, liver, and brain of mice and improved their resistance to oxidation. These antioxidant effects are due, yet again, to the thymol and carvacrol present in the oil of thyme. In addition, the amount of antioxidant activity occurs due to the ratio of the two phenols present in the essential oil, which for thyme essential oil is 15 to 1. 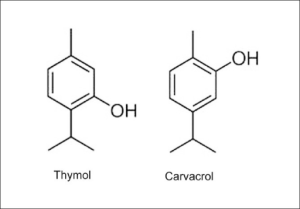 Chemical structures of thymol and carvacrol